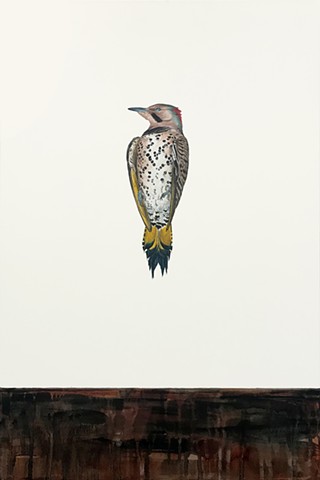 Kristina is a watercolorist depicting primarily avifauna and is best known for her portfolio of extinct bird species. The natural world is her inspiration, drawing from the existing beauty of our environment. As an avid birder, Kristina prefers to work from life and spends most of her time sketching and researching species in the field. In working with extinct species, she visits the Bird Collections of the Field Museum and Peggy Notebaert Nature Museum to study from skins. She enjoys using observation, anatomical references, and specimens to examine these species with an acute attention to detail. By exploring these birds in both life and in death, she hopes to bring a remembrance and sense of dignity to these lost species.

All works are watercolor on paper. A planned composition is drawn first, followed carefully by several layers of transparent paint. The extant, or existing, bird paintings are usually more illustrational, creating an optimum version of the species similar to that of a field guide. These are made as a formal study of the bird and keeping the background minimal. The extinct species, on the other hand, have a more uninhibited approach. Backgrounds are intentionally loose and ambiguous, contrasting representation with abstraction. Inevitably, these paintings are designed to express strong anecdotal value and often play on the history of the bird and it’s relationship with mankind.

Since graduating Valedictorian from the American Academy of Art in Chicago in 2012, Kristina has participated in numerous shows in Chicago and surrounding states, including Animalier: The Animal in Contemporary Art, Apocalypse 2012: Genesis 2013, and Facing Extinction. Her most recent solo show was at the Peggy Notebaert Nature Museum in Dreams of Martha, in conjunction with the 100th year anniversary of the extinction of the Passenger Pigeon.